The Church on the Hill 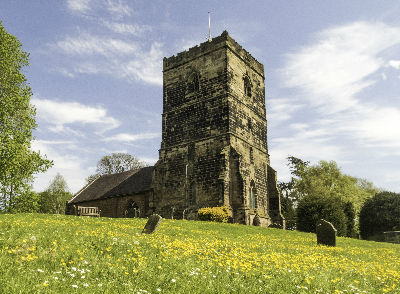 Dodderhill is the oldest site of any of the Droitwich Churches. There was a Roman fort on this hill, and although we don't know when the first church was built here, there was an Anglo-Saxon church on this site, almost certainly originally a wooden one, followed by a stone building. It was significant enough for St Wulfstan to acquire the living of St Augustine's for the priory of Worcester.

Work started on the Norman Church around 1180 AD and the building was completed around 1220AD. The crossing and north transept are the only parts of the current building that dates from this time. It was a very large church, as befitted the size of the parish, which was far more extensive than it is today, including what is now Wychbold and Elmbridge. One of the medieval rectors was Thomas Cantilupe, who held it among many other livings, and later became Bishop of Hereford. He was later canonised as St Thomas of Hereford. In this period there was also a hospital near the church, and the monks who ran it worshipped in St Augustine's.

After the dissolution of the monasteries the living passed into private hands, and the churchyard was used for all the town except those living around St Peter's. The comments of contemporaries suggest it was, as its position indicated, the dominant church of the area.

Its location, however, was to bring disaster during the Civil War. In 1646AD Parliamentarians were billeted in it, and in the Royalist attack the church was fired, and exploding armaments destroyed the nave and south transept, and severely damaged the rest of the building.

In the early 18th century, the tower and south transept were rebuilt, using the masonry from the damaged building, but the tower was now located over, and as part of, the south transept. The building retains this extremely unusual T-shape and positioning of the tower today. Various internal decorations and furnishings were added at this time, with more addictions being made as part of a late Victorian re-ordering, when new stained glass windows were added.

The tower contains a fine peal of eight bells, and visiting groups often come to ring them.