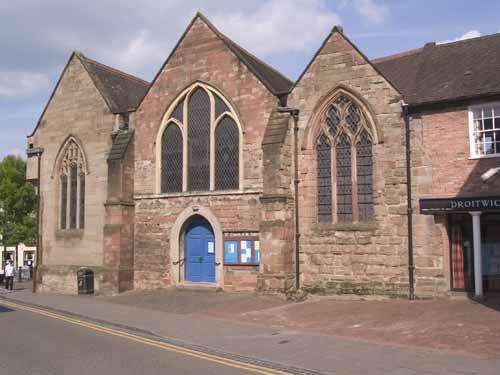 St Andrew's Church stands on the corner of Droitwich High Street and St Andrew's Street and is opposite the old town hall. Although its dominant position in the town centre has now been largely obscured by the number of buildings around it, a walkway and marketplace leading from the Waitrose car-park into the High Street has helped restore its visibility.

Parts of the building are Norman, and it is most likely the church in which St Richard was baptised and worshipped in the early part of his life. The church underwent significant rebuilding in the 1920s as a result of subsidence, which had made the tower dangerous, so that it had to be removed.

The church contains a number of memorials, most noticeably that of Captain Norbury, whose family vault lies in Dodderhill churchyard. He was a naval officer, who distinguished himself by his service in the West Indies, and also served as an envoy from George I to the Court of Morocco, and was engaged in negotiations to free slaves.